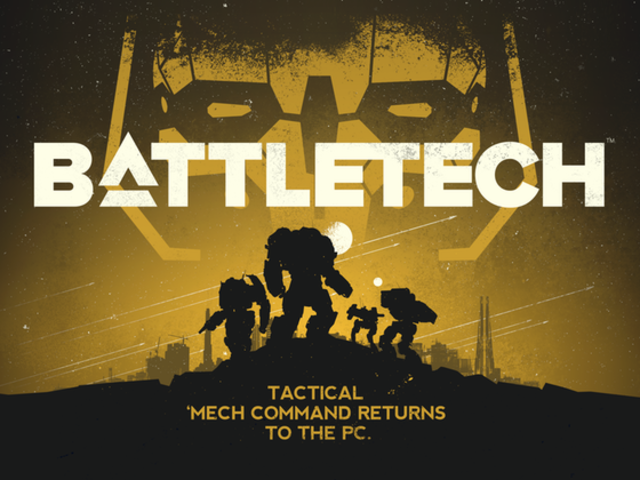 Turn-based tactical 'Mech combat set in the classic 3025 era of the BattleTech Universe. From the creators of the Shadowrun Series!

Latest Updates from Our Project:

This week’s Bonus Backer Mission is to share your BattleTech collections with the hashtags #myBTstuff and #BATTLETECH. We’ve already gotten a bunch of incredible submissions, have unlocked two points, and, um…you all have some really cool stuff. Seriously. We’re a little jealous. Here are some pictures of your BattleTech Stuff that we love.

You’ve been doing a great job with the Bonus Backer Missions and have until the 14th to get all the points for this mission! So, keep it going -- share pictures of your Stuff with #myBTstuff and #BATTLETECH !

A Peek Behind the Curtain

Part of the fun of running a Kickstarter project is the opportunity to give you a peek into our development process, who’s on the team, and what sort of progress we’re making.

With all the talk about design and art, we haven’t said anything about programming yet, so our first Peek Behind the Curtain is at our Lead Engineer, Chris Aardappel.

My name is Chris Aardappel and I've been playing various forms of BattleTech since I was 15 years old. I've many good memories of the franchise, some around a tabletop, some strapped into a Virtual World pod, and many in front of various computer screens.

Most memorably, in 1995 a friend lent me his copy of Mechwarrior 2. That night, I popped the CMOS battery from my Dad's Radio Shack purchased Tandy IBM Compatible PC (486DX 100!) so that I could bypass his password and join the ranks of Clan Jade Falcon. That trick got me grounded, but it was worth it!

My time at HBS has been thrilling. Shadowrun is another old favorite from my youth, and while working on Shadowrun Returns was a blast, watching this studio turn the dial up to eleven through the course of Shadowrun: Dragonfall and Shadowrun: Hong Kong has been a true pleasure. Working with Jordan on Golem Arcana was an incredible experience. There's real magic in watching a fictional world as rich as Eretsu come to life! It’s fun working on a new game setting, and I really love the game’s mixed media approach to tactical miniatures gaming.

Now, as lead engineer on BATTLETECH, I am responsible for architecting the software that will make our teams’ vision a reality. This mostly involves taking a high level view of the software and understanding how all the pieces will fit together. Everything from small details like how we load individual game assets to major components like “How SHOULD procedural mission content actually work?” falls under this umbrella.

Another large part of my job is working with other team members to ensure that they have the tools they need to make a great game. The software needs to be able to adapt to the needs of it’s content creators as much as it needs to be a really great BattleTech game. I'll also be individually contributing some code, although exactly which pieces are yet to be determined.

I am indescribably excited to help bring this old friend of mine into a new phase of life. I guarantee that if I'm not up at night obsessing about the code behind this endeavor, I'll be squinting at 'Mech loadouts and optimizing my favorite Jenner to the nth degree! Or, you know, maybe my new baby needs a diaper.

See you on the battlefield!
Chris

If It Ain’t Broke, You Didn’t Try Hard Enough

Even during the midst of battle, the back of every mercenary commander’s mind is running a constant tabulation of the return on investment for that mission. Things may be looking good, but in the instant it takes for a PPC to arc across the battlefield, those projected profits can turn to guaranteed losses based upon the damage inflicted on the commander’s BattleMechs.

One of the design goals of the Stage 3 Extended Mercenary Campaign that we’re most excited about is the player’s balancing act between reputation and economic reality - and the fulcrum of that balance is often the damage taken on the battlefield.

Every ton of armor and every internal component of a ‘Mech can be damaged or destroyed and that damage will persist until repaired (or until the entire component is replaced.)

So although your mercenary contract fee is established before a mission begins, the cost of executing that mission is variable largely based upon the amount of damage your ‘Mechs and MechWarriors took in accomplishing it.

Returning from a mission, you now face a choice - how do you want to address the damage your ‘Mechs have received? While the diverse skills of your MechWarriors have a large impact on your battlefield success, it is your MechTechs that will determine the cost and time of repairs, and the options you may have in refitting your 'Mechs.

Below are some of the options we’d like you to have, depending on your MechTechs, reputation, and your financial situation. (As always - keep in mind that this is our current thinking, and that over the course of development we will explore the fun of these design concepts and determine how deep each of these systems should be.)

Sometimes, it may even be wisest to withdraw from the field entirely before a mission is complete. It’s a tough choice to make - whether to cut your loses and preserve your Lance in better fighting shape for the next mission at the expense of your Mercenary Outfit’s reputation. Or you stick it out till the end, claiming payment and the reputation boost accompanying it - regardless of the larger financial fallout it may cause the Outfit.

One of our design goals for the game is that a successful Mercenary campaign doesn’t have to be an unbroken string of victories - it’s possible to abandon or lose missions as well as complete them. We’ll be striving to balance the game appropriately and ensure that losses can be bounced back from if you’re able to adapt your approach. (This will be particularly engaging for Ironman mode, which is something we’re all very excited about allowing as an option for this game.)

Our goal is for you to face a variety of complex Mercenary outfit management choices like this - where there’s not always a right answer - over the course of the Stage 3 extended campaign. After all, “heavy is the head that wears the crown” - and as the leader of your own Mercenary outfit, that crown’s on your head.

-- HBS
PS: Next Friday 10/16 at 10:30 AM PDT, Mike will be doing an AMA on Reddit to talk about both BATTLETECH and his work on the Shadowrun series. Bring your best questions about our games, art and games in general, or working in the game industry! Or if nothing else, he'll be happy to share lots of pictures of his cats.

Wow! Our Kickstarter is only 3 days old and you’ve already hit our next Funding Goal. Thanks to your generous support, we’re able to add voice acting to the game! Hell yes!

We should also point out that thanks to the Global BattleTech Community, a SECOND Michael A. Stackpole e-novella has been added to the $50 Reward Level. And if more Backer Missions are completed, a third and fourth e-novella can be added, too!

And remember - if the GBC is able to earn 60 pts, Mr. Stackpole has agreed to drop the e-novellas and commit himself to a FULL LENGTH 3025 SUCCESSION WARS ERA NOVEL.

We’ve gotten a lot of feedback on our Comments page about Backer’s desire to purchase Add-Ons and support the project. We would LOVE to be able to offer all sorts of cool BattleTech physical goodies for you to purchase but unfortunately, right now we can’t.

While we are able to offer some sweet physical rewards as a THANK YOU to Backers, we don’t have the rights to SELL physical goods to you in the form of Add-Ons. We’re working on it, though, and hope to be able to offer some cool physical Add-Ons before our Kickstarter campaign is over. If and when it happens, we’ll send you an Update ASAP!

But we did hear that you also want DIGITAL ADD-ONS, so that you can buy copies of BATTLETECH for friends and family. So we're very happy to add that!

One of the more treacherous elements that we’d like to include in the Stage 3 Expanded Mercenary Campaign is negotiating contracts with potential employers - who can be anyone from the leader of a local farming cooperative, to the crown prince of a Great House.

We are currently thinking that mercenary contracts will contain a variety of clauses or terms that can be negotiated. For example, you might trade a higher initial downpayment for increased salvage rights on a given mission. Or, insist that the client provide some of their own military support for a particularly dicey operation, in exchange for a reduction in fees for completing a mission objective.

You may decide to negotiate and try to improve a specific clause in your contract, but remember - it’s a negotiation, so improving the terms in one area may cause the employer to worsen the terms in another. Ideally, different employers will have different contract terms they’re prepared to negotiate and “hot button” issues that may result in negative reactions if pressed too hard. We like the idea that over time you might learn the negotiating style of a particular representative, and thus improve your negotiating success rate with them.

In BATTLETECH, an employer’s agenda isn’t always what it seems. Don’t be surprised if the minor noble from House Marik who’s assigned to negotiate with you slips a little something for herself into your mission objectives. Going out of your way to accomplish that objective might earn you more favorable terms on future contracts, but at what cost?

If we hit Funding Stage 3, over the course of development we will explore the fun of these design concepts and determine how deep each of these systems should be. We’re excited to bring the contract negotiation aspect of mercenary life to the game, and to use it as a vehicle to illustrate the political intrigue of the Inner Sphere.